William Anders was born in Hong Kong, China on October 17, 1933. His father, Lt. Arthur Anders, was an American Naval officer assigned to the USS Panay, which was protecting American personnel and interests on the Yangtze River in China. When the Panay’s Captain was incapacitated by the first bombs, a wounded Arthur Anders was the first American Naval Officer to order “Open Fire” on the Japanese Imperial Army on 12 December, 1937 as his crew turned to defend the Panay from Japanese attack. Arthur Anders was awarded the Navy Cross and Purple Heart for bravery during the event that became known as “The Panay Incident”.  A young William Anders, on shore with his mother Muriel, still remembers the bombs being dropped on the town of Nanking by Japanese aircraft. 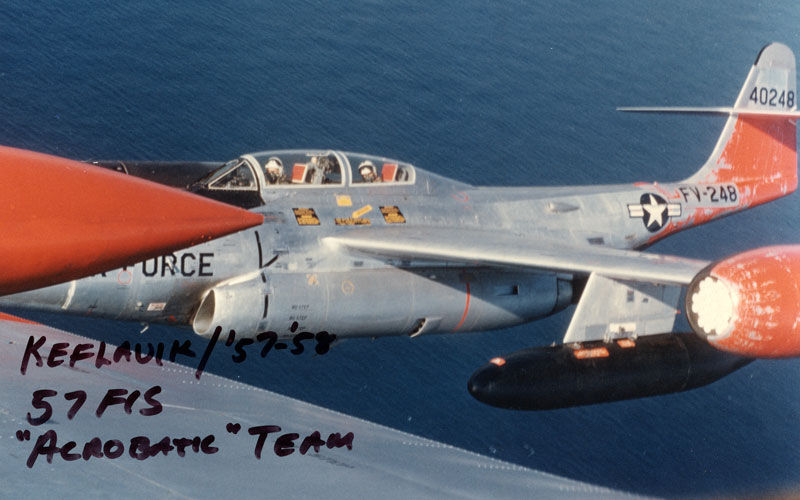 After returning to the States, and following several assignments, the Anders family settled in La Mesa, California where William Anders graduated from Grossmont High School just east of San Diego, California. Anders attended the United States Naval Academy, graduating in 1955 with a Bachelor of Science in Engineering before commissioning into the U.S. Air Force and earning his pilot’s wings in 1956. He married Valerie Hoard, who was also from San Diego. Anders’ first assignment out of Pilot Training had him flying the F-89 “Scorpion” aircraft armed with the nuclear tipped “Genie” air-to-air missile. He spent a year in Iceland flying this aircraft with several intercepts of Russian Bear Bombers. Back at Hamilton AFB in California, Bill transitioned to the F-101 “Voodoo”. 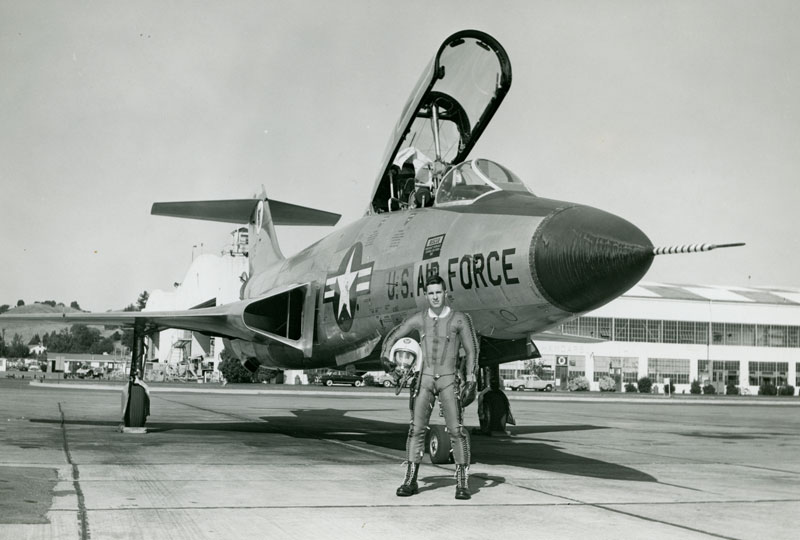 In 1962, Anders graduated with honors from the USAF Institute of Technology with a degree in Nuclear Engineering (specifically: Space Radiation) and was assigned to the Air Force Weapons Laboratory at Kirtland AFB in Albuquerque, New Mexico. Anders was selected in 1963 by NASA from a pool of thousands of applicants for the third group of astronauts and was initially assigned to the backup crew for the Gemini 11 mission. 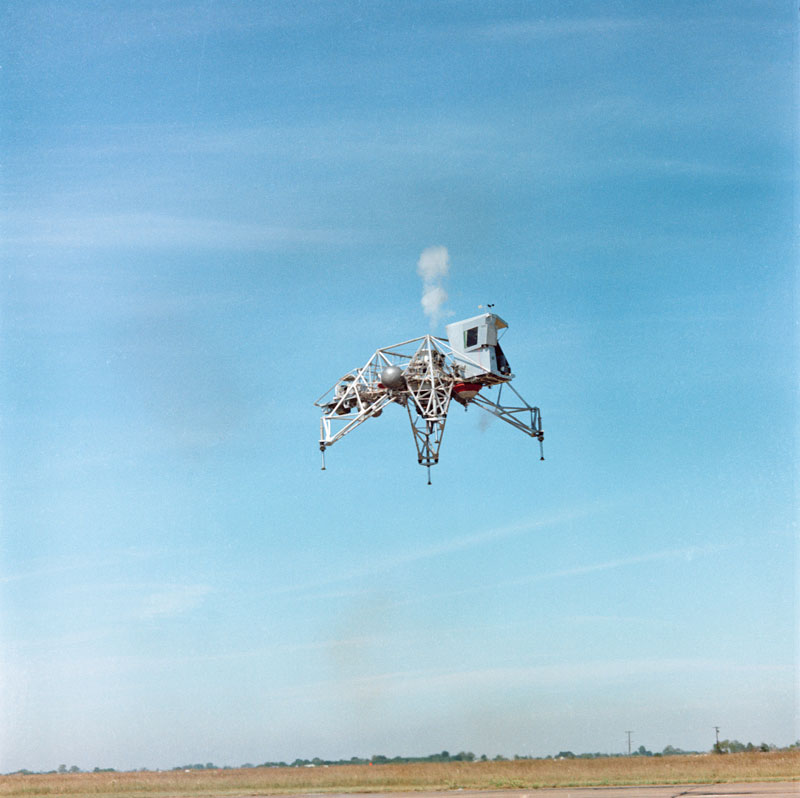 The Apollo 8 mission launched on December 21, 1968 and marked the first manned flight of the Saturn V, the first time that humans had left Earth’s gravity, the first humans to travel to the moon and fall under the gravitational pull of a celestial body other than Earth, and the first humans to see the Earth rise over the horizon of another celestial body. One of the most memorable moments of the flight came on Christmas Eve of 1968 when, in a live broadcast from the moon, the crew read the first verses of the Book of Genesis. Because of the incredible success of the mission, and because Apollo 8 was one of the very few bright spots that occurred in the very dark year of 1968, Borman, Lovell and Anders were named the Time Magazine’s Men of the Year for 1968. Their Christmas Eve broadcast from lunar orbit won an Emmy Award, and Anders’ famous “Earthrise” image was selected by Life Magazine as one of the “100 Photographs that Changed the World”.

Exercising the traditional rights of explorers through the ages, the crew of Apollo 8 chose three craters that had never been seen by human eyes to carry their names. The craters were right below the spacecraft when they could see the Earth rising above the horizon. The IAU denied the names of these craters, and instead named three craters that were never in view of the crew at any point in their mission. Following the Apollo 8 mission, Anders was assigned as the backup Command Module Pilot for the Apollo 11 lunar landing mission. He was then asked to serve as the Executive Secretary of the National Aeronautics and Space Council in Washington DC. After several successful years in that post, he was appointed a commissioner on the Atomic Energy Commission. In 1975, he was appointed by President Ford to be the first Chairman of the Nuclear Regulatory Commission. He was then appointed Ambassador to Norway in 1976. In 1977, upon returning from Norway, Anders stepped away from governmental service, re-acquired his military commission in the Air Force Reserves, and became the Vice President of the General Electric Company serving in several positions in their Nuclear and aircraft divisions. In 1984 he accepted the position of Executive Vice President for Operations at Textron Corporation in charge of several of Textron’s businesses, such as Bell Helicopters. This post allowed him to resume one of his passions: helicopter flying. In 1988, 33 years after his initial commissioning, Major General Anders retired from the Air Force Reserves. He joined General Dynamics late in 1990 and became the Chairman and CEO of General Dynamics Corporation in 1991. Along with being Chairman and CEO, Anders was also one of the Aircraft Division’s Test Pilots, flying several missions testing new systems on the F-16 Fighting Falcon. In taking on General Dynamics leadership, Anders was tasked with turning around a languishing Defense Contractor. With the support of financial luminaries such as Warren Buffet in his corner, he turned GD around, taking a $19 stock value to over $250/share (non-stock split equivalent) in his short tenure at the company. He retired from General Dynamics in 1993, staying on as Chairman until 1994. Bill and his wife, Valerie, moved to Orcas Island in Washington State in 1993, with a second home in their home town of San Diego California. They have six children and 13 grandchildren. Shortly after retiring, Bill & Valerie established the Anders Foundation supporting educational and environmental concerns as a vehicle for supporting several of their interests including Yosemite National Institute, and Olympic Park Institute. The Anders Foundation has been instrumental in many projects.

Bill returned to flying by pursuing an interest in general aviation with emphasis on military warbirds. One of Anders’ early mentors in the general aviation world was none other than his former Apollo 8 crew commander, Frank Borman. In 1996 Bill attended the Reno Air Races and got a behind the scenes look at the world of air racing. Bill got the fever for racing and raced Val-Halla in 1997. Seeing the F-8 Bearcat’s performance at the races, Bill purchased a Bearcat that had raced in the first Reno Air Races (1964), named it “Wampus Cat” and raced it along with Val-Halla in 1998 & 1999.

Flying a plane in both the Bronze (Val-Halla) and Silver (Wampus Cat) races made for a challenging but exhilarating experience for Bill and all of his team. Probably his “best” race was the 1997 Silver unlimited final race in which the winds and turbulence were both very bad. Dipping into his Icelandic Interceptor Pilot experience, Bill shook off the bad conditions placing 3rd in the Silvers with fewer aircraft modifications to Val-Halla than several of those he beat.

Bill & Valerie started the Heritage Flight Museum around the P-51 Val-Halla in 1996. It has steadily grown ever since and currently resides at Skagit Regional Airport in Burlington, Washington. In 1997, Bill flew Val-Halla to the East Coast to participate in the first Gathering of Mustangs and Legends. While on the East Coast, he had the opportunity to fly a 3-ship photo formation with Big Beautiful Doll as the photo ship, and his son Greg in his F-15E. From this photo sortie came the photo that is incorporated in the Heritage Flight Museum’s logo. 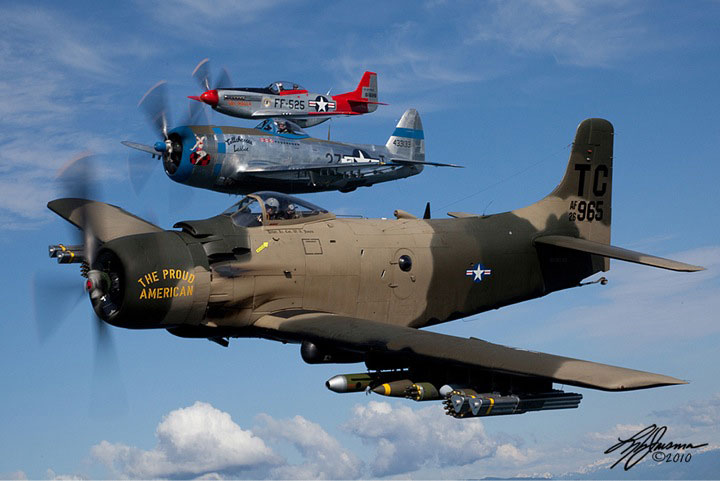 As the museum grew, Bill’s two sons who had found a passion for aviation joined him in the Puget Sound area to help run the museum. Bill had the great experience of being able to fly formation with two of his six kids piloting the other aircraft. The museum is home to 14 aircraft, several antique military vehicles, an impressive library, and many great artifacts. Frank Borman in back seat of first T‐6,  Jim Lovell in second T‐6 with Bill Anders in third T‐6

In 2016, the Heritage Flight Museum hosted Frank Borman and Jim Lovell for “An Evening With Apollo 8.” Hosted by David Hartman, this onstage interview provided an opportunity for attendees to listen to the three prime crew members, two Mission Controllers (Jerry Griffin and Milt Windler) and Valerie tell the stories of the Apollo 8 mission. One facet of that event resulted in the Apollo 8 crew taking to the skies together again in three T-6’s.

As the 50th Anniversary of Apollo 8 approached, the IAU was once again reminded of the slight of the Apollo 8 crew that had happened in 1969. Bill had been pursuing a resolution for most of that time. The IAU stepped up to repair their mistake, renaming two of the craters clearly visible in the iconic Earthrise picture. One was named “Anders’ Earthrise” and the other “8 Homeward.” Bill and Valerie continue to enjoy their life in San Diego and the Pacific Northwest with their PNW home now in Anacortes.

Other recommended Books about Bill: